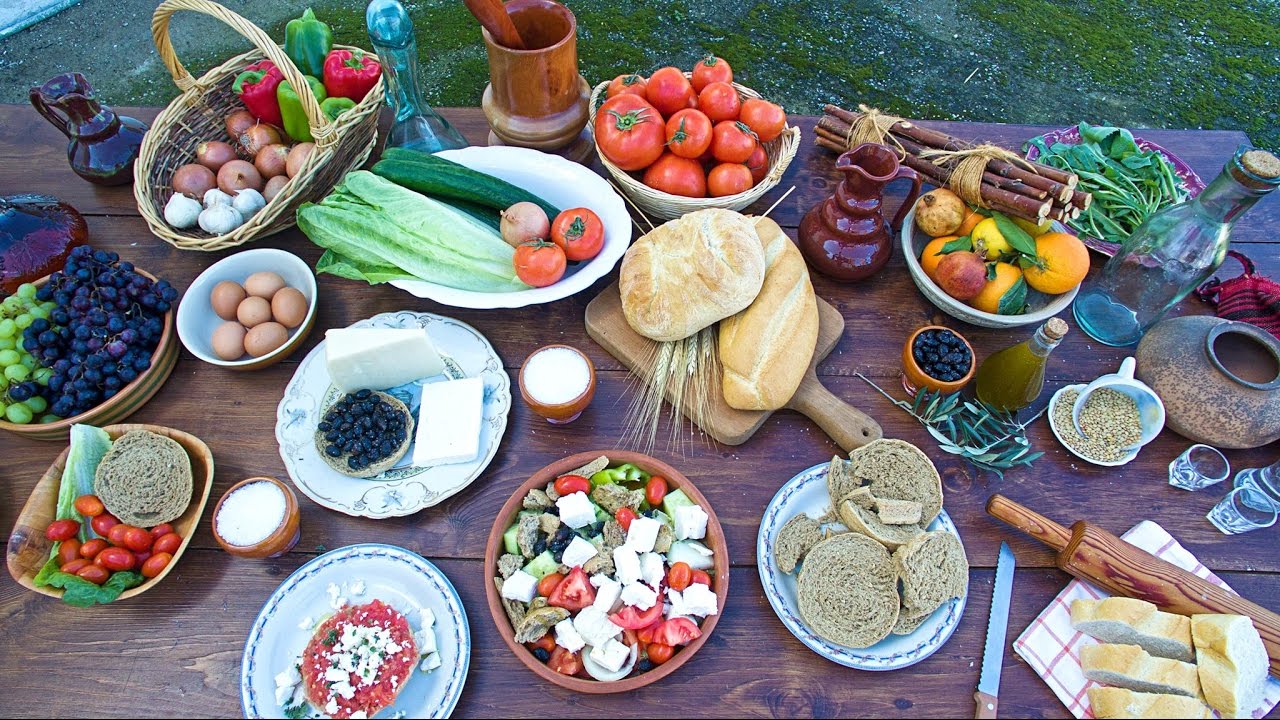 The Synopsis Of Mediterranean Diet

In recent years, the international scientific community has been increasing its efforts in the quest for the ideal diet in terms of health. Cretan diet lies at the centre of attention, as most studies present Cretan cuisine as the most typical example of high-quality Mediterranean cuisine. Cretans, admittedly, have the highest longevity rate in the world and the lowest mortality rate from conditions such as cardiovascular diseases and cancer.

But what is the secret of the Cretan diet? Crete has one of the oldest and most tasteful cuisines in the world. It is the continuation of traditional flavours, aromas, ingredients and styles dating all the way back to the Minoan times. Archaeological findings show that 4000 years ago ancient Cretans consumed more or less the same products as Cretans today. Many large urns used for storing oil, wine, cereals, legumes and honey were found in the Minoan palaces.

The recipe for longevity never tasted any better

In the course of its long history, Crete’s gastronomy has been greatly influenced by the many people who tried at one point or another to conquer it. But if we examine this timeline more closely, we will find that Cretans had a way of filtering every dietary habit and adapting it to their standards, thus adding a special character to it. Century after century, the soul, the language and the cuisine of Cretans has remained unchanged!

This continuity and the ability of the island to preserve its personal character, despite changes and adversities, formed a tradition which is now proven to be particularly valuable. Thus, the international scientific community not only speaks about Cretan cuisine, but also about the miracle of the Cretan diet!

The Cretan cuisine is not considered rich in terms of variety of ingredients. It is a cuisine based on what the Cretan land has to offer. Focus is placed on the art of cooking and the processing of simple ingredients, rather than on using complex and rare combinations of expensive raw materials.

The Cretan cuisine is different from other cuisines because it does not try to mix flavours, irrespective of the variety of the ingredients used for the everyday table. Each ingredient maintains its autonomy, its identity and its flavour. They all co-exist in harmony, highlighting this fine balance that defines the Cretan cuisine and the island in general.

Each region in Crete has its own specialties. Cretans feed on the products of their land: plenty of fruit and vegetables, greens, and legumes. The use of meat is relatively limited in Crete, while cheese holds a special place on the table. Herbs and plants picked from the island’s mountains add flavour to everyday food. As a rule, lunch or dinner is always accompanied with local wine and exceptionally tasty hand-kneaded bread. In general, one might describe Cretan cuisine as an imaginative, creative, and particularly aromatic proposition, based on simple seasonal ingredients, and the art that comes from the love for the land and the attachment to traditional cooking methods.

Olive oil and wine: a holy alliance for good health

If you go on a tour around the villages of the Cretan inland, wherever you turn your head, you will see the holy alliance that lies at the heart of the Mediterranean diet: every vineyard is always next to an olive grove. It does not require much effort to understand that olive oil is a special nutritional product for Cretans, who, like the rest of the Mediterranean people, use it as their main source of fat. Olive oil has been used in Crete since the Minoan times, replacing butter or other kinds of oil used in other regions of the world. Its value is immense, given that it is the most powerful antioxidant found in nature.

Olive trees have been cultivated in Crete since 3000 BC. The Mediterranean climate of the island and the favourable composition of the soil allow olive trees not only to grow everywhere, but also to provide the highest possible quality of oil, with low acidity and a wonderful flavour. The fact that Cretans live longer and have the lowest disease rates seems to be directly connected to their being among the largest consumers of olive oil in the world.

The second, yet as important, chapter in Cretan diet is wine. In recent years, it has been proven that two or three glasses of wine per day offer protection from cardiovascular diseases. Moreover, the substances contained in the skin of the grape interact with the barrel where the product is stored to create polyphenols, very powerful antioxidants with significant anticancer properties! Cretans, however, do not need medical studies proving that wine, when consumed in moderation, may have a beneficial effect on health. For them, there is only the traditional way of life, which dictates that wine should accompany dinner or lunch. Wine is a part of Cretan culture.

Cretans never drink on their own. Wine is the basic ingredient of companionship and socialising. They drink together, they laugh and they talk. Modern wineries in Crete have put to good use the traditional vine varieties and the experience accumulated over the centuries. Tradition goes hand-in-hand with knowledge and technology, for maximum enjoyment and good health.

The main features of the Cretan diet

The Cretan diet is a way of life: plain, simple, with no redundant spices or taste boosters. But, at the same time, it is particularly scrumptious in a natural way, one might say. Simplicity brings forward the ingenuity of the hostess, who wields her age-old experience without strictly adhering to recommended doses.

What counts the most in traditional Cretan cuisine is imagination. Cretans may eat greens or legumes every day, but they almost never eat the same food. The Cretan hostesses continuously invent new ways of bringing out the quality of ingredients through various simple and ingenuous combinations.

A typical feature of the Cretan table is the variety of dishes, which combine with one another to form a tasteful entity. Besides, the main features of Cretan cuisine can be summarised as follows: the products used are strictly local and seasonal. Wild greens are eaten raw or boiled, either as the main cooking ingredient or as an accompanying dish or salad, sometimes used only to add flavour. Meat comes mainly from goats (usually free-range), poultry and pork. Spices are always present, but in a rather discreet way.

Dairy products are an important part of the Cretan diet. Fish and other seafood are considered wonderful dishes, while no other cuisine in the world places snails at such a high place. Legumes are consumed in large quantities, usually during fasting periods, while aromatic herbs are mainly used to make various beverages. The main sweeteners in Crete have always been grape syrup and thyme honey. Finally, when talking about Crete, we cannot leave out what Cretans themselves consider one of their greatest secrets for longevity and good health: Cretan tsikoudia , a strong spirit produced from the grape residue left from the winemaking process. Tsikoudia, accompanied by a tasty snack, as well as the sounds of lyre and lute, can calm any untamed Cretan soul!

A glass of kotsifali along with some kefalograviera cheese is the best prelude to a Cretan meal. Besides, on Crete, cheese always comes before the main course, so as to clear the taste palette and sharpen the appetite. An ideal snack to accompany wine or tsikoudia is also Cretan apaki, oblong slices of smoked pork. Cretan sausages, made of pork minced meat and lots of spices, are also very popular, in several varieties.

There is abundant game in mountainous regions, including hares and rabbits, in addition to various birds. A particularly tasteful specialty is hare cooked in wine. The hare is first marinated and then cooked in an earthenware pot. There are also plenty of wild aromatic mountain greens used to make delicious pies.

Those of you who like lamb fricassee must try it cooked with askolymbros, a fleshy and tasteful root growing near the sea. It requires experience to locate, but also special skill to remove its thorns.

The ingenious Cretans have even included the vine itself in the list of raw materials used in local cuisine. In the spring, in certain well-hidden taverns in Crete, one may taste a rare specialty: goat cooked with fresh vine sprouts.

The dairy products of the island are particularly popular. Gruyere, semi-hard kefalotyri cheese, goat cheese, fresh and dry whey cheese stand out and are considered to be among the best kinds of cheese Greece has to offer. A typical treat is dakos, which is Cretan barley rusk topped with tomato, olive oil, and fresh whey cheese.

The island’s snails hold a special place in the Cretans’ menu. Once you have tasted the famous local recipe, you will become a fan for life.

Turning to dessert, an exceptional choice is Cretan yogurt served with aromatic thyme honey, while a particularly pleasant surprise awaits you when you taste the irresistible combination of local gruyere and honey!

If you are looking for a healthy diet without compromising your enjoyment for food, you have just found out the most tasteful way to live a long life with no health problems. Besides, 4000 years of tradition cannot be pointing in the wrong direction. The recipe for longevity has never been more tasteful.

The centre of Minoan civilisation and capital of Minoan Crete lay 5km south of Heraklion. Knossos flourished for approximately two thousand years. It had large

Samaria Gorge (Opens to Public on May 1st)

Samaria Gorge in Crete will open for visitors on May 1, the local authorities have confirmed. According to an announcement, the forestry agency has taken all necessary

Chania is unreservedly Crete’s most evocative city. At the Venetian port, the light house is the most familiar picture when someone refers to this city. This

Sfakia is a small fishermen’s village located south of Crete. During the summer, it’s full of life because at its small port the ferry boats dock, 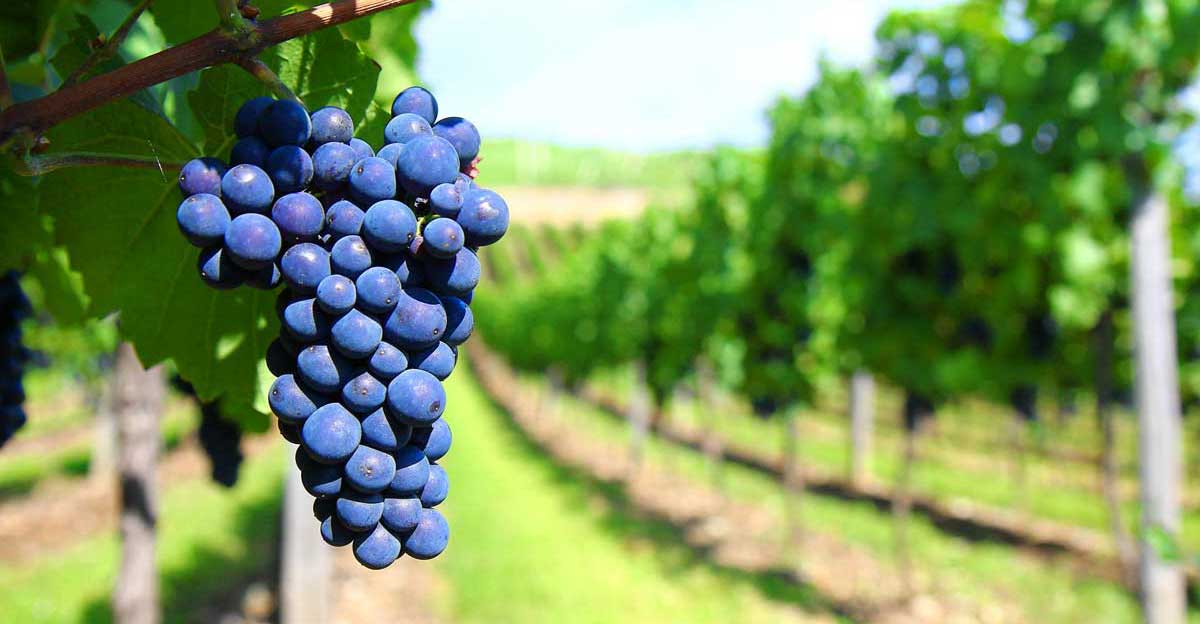 Routes of Wine in Crete

Rent a Car and meet the Routes of Wine in Crete The “wine roads” of the Heraklion Prefecture lead visitors to age-old vineyards, historical villages,

Elounda is located in east Crete, north of Agios Nikolaos and south of the seaside resort of Plaka. Elounda was once a picturesque fishing village in 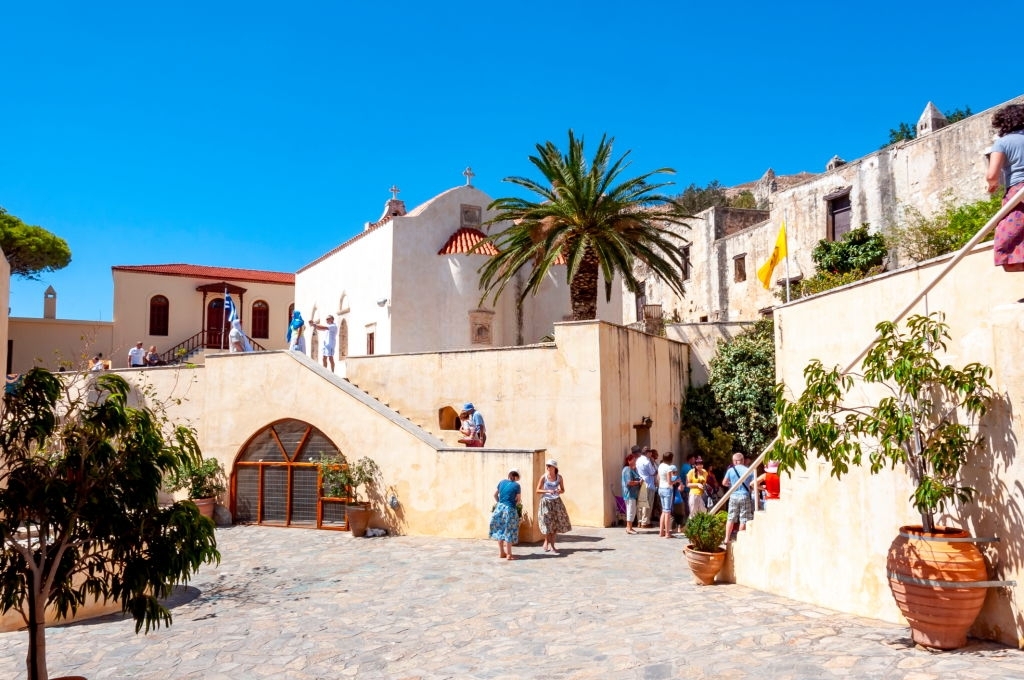 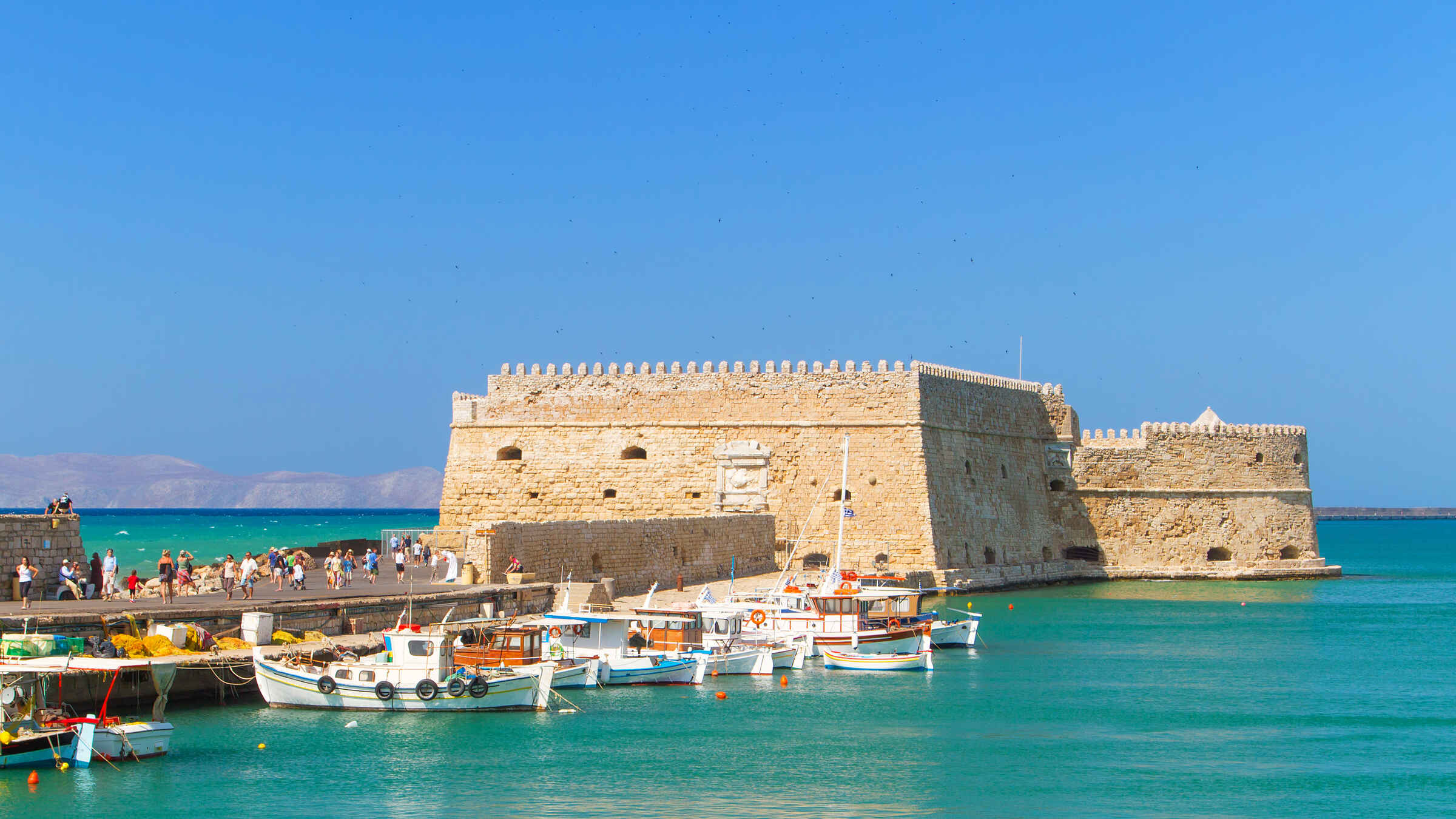 Heraklion is the largest city in Crete, located roughly in the centre of the north coast. Heraklion has a population of 131,000 (2001 census), but it 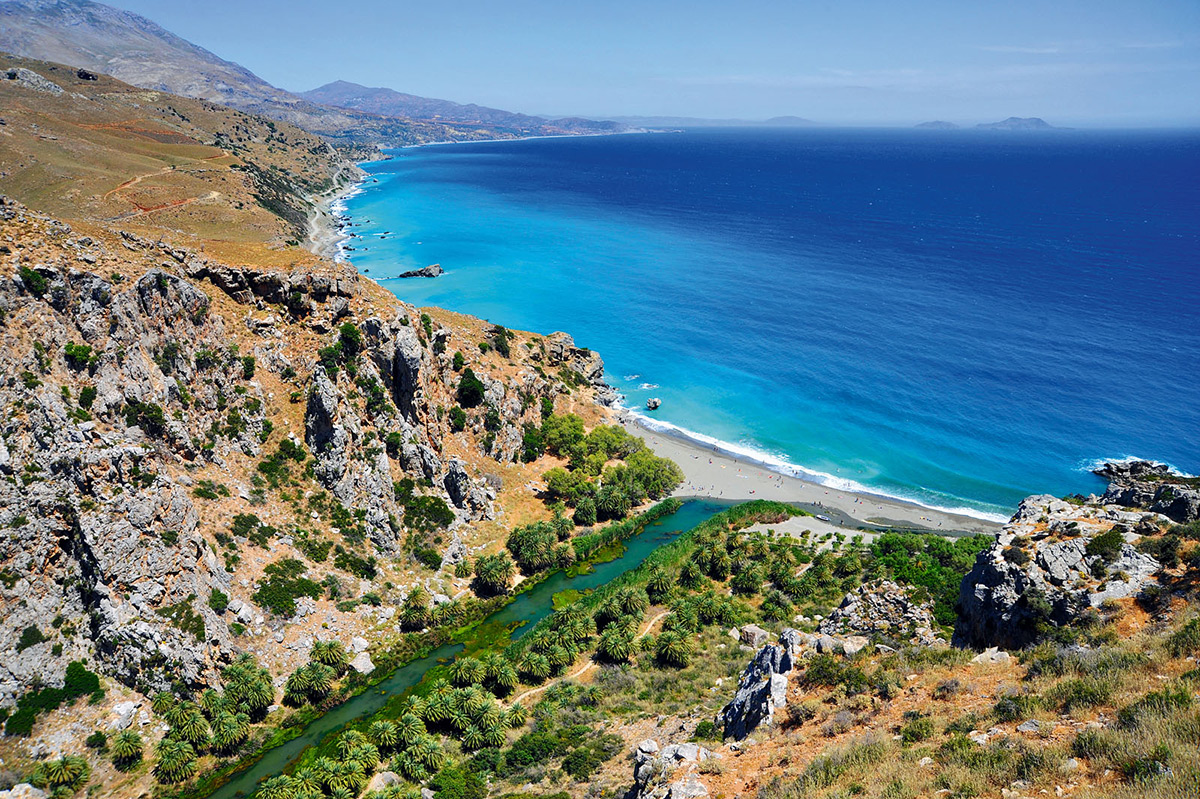 Preveli with its riverside palm-groves (burnt in the summer 2010, but regenerated at the moment) is one of the most famous and beloved beaches in

Get a Price Quote!